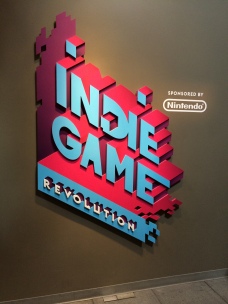 If you ever get a chance to see the great city of Seattle, you need to stop by the EMP Museum.  The museum showcases different permanent and rotating exhibits dealing with popular culture and technology subjects.  During my recent trip, they had sections devoted to Horror, Fantasy, Star Wars, Nirvana, Jimi Hendrix, Looney Tunes, but most importantly – games.  Specifically, EMP had an Indie Game Revolution (sponsored by Nintendo) exhibit that focused on the recent growth and popularity of smaller title and non-AAA games.

The exhibit features numerous stations that outline the history and current development process for creating indie games (with a note regarding the ambiguous definition of “indie game” as it stands today).  I made sure to snap these photos to share, and hope they give a flavor of how the exhibit was laid out.

Middle section of the exhibit

The room was filled with the stacked cubes you can see in the photos, along with large projectors, TVs, and audio booths.  There were also large information boards that had timelines, developer commentary, and pictures of game development and ideas.

When I first entered, I started with the game stations for both Kentucky Route Zero and Nidhogg.  I had heard of, but not played, either of these PC games.  Nidhogg was up on a large projector with joysticks available for 1v1 against other players.  Kentucky Route Zero, unfortunately, was stuck on one screen so I was unable to progress or do anything besides go through one dialogue choice.  I guess it would be hard to get into a episodic, story based game at an exhibit anyway.

I also stopped by several of the audio stations that had headphones that looped through commentary by industry figures and developers. The one I enjoyed the most had multiple segments about Rogue Legacy, a game I finally nabbed during the last Steam winter sale. It had game critics talking about the gameplay, developers describing what a “roguelike” game is, as well as the composer detailing how the music was implemented.  This station stood out because you could choose each segment separately on a touchscreen.  The other stations just simply looped through a prearranged set of audio tracks, so you had to wait if you wanted a specific one. 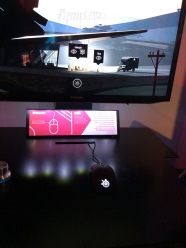 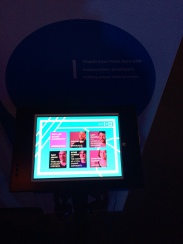 The exhibit was fairly busy, and most of the gameplay stations had someone playing with another waiting to take over.  The variety of games kept things interesting, notably there was one game, Panoramical, that used a mixing board to create life and plants on an alien planet.  Another popular game was Tenya Wanya Teens which had two 4×4 lighted button boards and required two players.  It appeared that you had to decipher which button would perform the on screen task (catching salmon, taking a shower, brandishing a sword).  The appeal was in the strange animation and funny sound effects, as in the beginning both players would button mash leading to the avatar showering in a forest and then urinating on salmon.  Yeah, it was weird.

Projector screens were used for some games

All in all, it was an interesting exhibit and I’m glad that gaming, and indie games in particular, were able to get some spotlight.  Hopefully the exposure will also pave the way for similar exhibits or ideas in the future.  I also took some pictures from the Fantasy exhibit, since a couple pieces caught my eye. 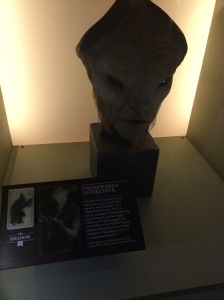 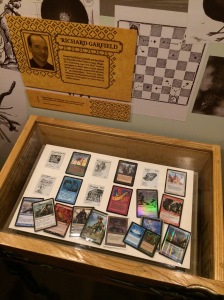 One thought on “Visit to EMP Museum: Indie Game Revolution”