Taking control of our hero, Shovel Knight, you play as exactly that – a Knight that wields a shovel.  While that may not seem that exciting, the throw-back themes in which Shovel Knight immerses are a great nostalgic trip.  The game combines solid gameplay with varied environments and bosses, while including quality of life improvements that 8-bit games should’ve had 25 years ago.

In replicating its NES roots, Shovel Knight augments the experience with interesting characters while mimicking the basics of 8-bit stories.  NES games were never known for their grandiose storytelling (or any storytelling), especially in platformers.  The basic premise in Shovel Knight centers around The Enchantress, who has taken other Knights to her evil side, all of which are opposed to Shovel Knight’s ultimate goal — saving his best friend Shield Knight, who has presumably been kidnapped.

The basic progression is a level by level map a la Super Mario Bros 3, where you move across the map and beat each discrete level.  There are towns that you can enter to stock up and also talk with the local populace.  The bosses for the levels are the aforementioned Knights.  Polar Knight uses the obvious ice attacks in a snow themed arena, while Plague Knight bounces about in a laboratory, flinging beakers of explosives.  Each of these Knights taunts Shovel Knight before and after, helping to flesh out, slowly, the fate of Shield Knight. 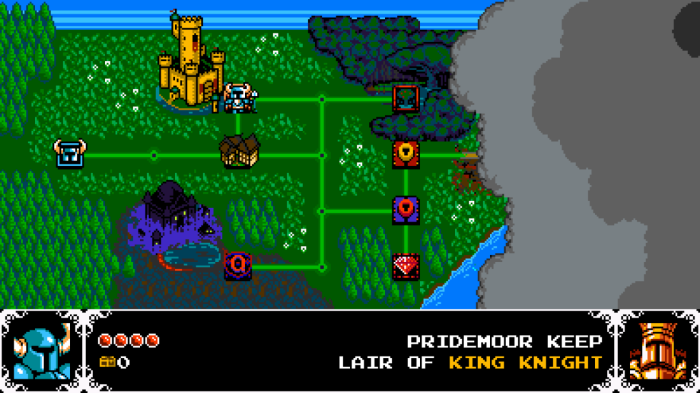 Overall, the narrative is anything but monumental.  The drive to save a friend is one step removed from saving a princess, but given the direction of the title, meets expectations.  For an 8-bit platformer, Shovel Knight hits the right narrative notes — interesting characters, cool and varied environments, and a satisfying climax at the final boss.

Where the 8-bit platformer lacks in story, it must make up for it in gameplay.  Shovel Knight manages to hit a great balance of nostalgic flair, combined with modern sensibilities.

As previously mentioned, the basic progression is to clear the map level-by-level, beating each Knight along the way.  The levels themselves are typically based on a theme, and often have an associated item that helps clear its secrets.  These items include effects such as shooting a fireball or becoming temporarily invincible.  While geared for combat, these items are also helpful in accessing little in-level puzzles to access secrets.

Alongside finding Shield Knight, Shovel Knight apparently harbors an unsatisfied avarice for gems, coin, and jewels.  Throughout the level, enemies and chests contain said treasures, which are also a proxy for Shovel Knight’s “lives.”  While Mario has a life counter, Shovel Knight’s deaths result in a reset to predetermined checkpoints, along with a loss of treasure.  The treasure remains in the level with each retry, often hovering as sacks with wings above the numerous pits and spikes that caused the Knight’s demise.  Of course, more deaths that fail to regain this treasure result in less treasure outside the level, which is critical to buy upgrades, equipment, and items. 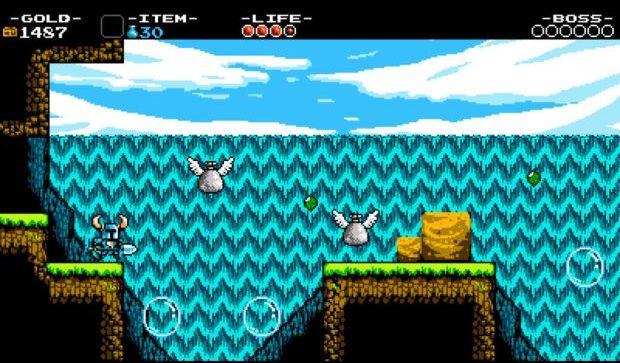 Shovel Knight is hard.  “Back in the day” NES games were hard too, but Shovel Knight manages the frustration of constant death with the treasure drops.  You can replay the level over and over without worrying about a true game over.  Platforming while dealing with a plethora of enemies can get difficult, but given some of the items, can be made much easier.  Shovel Knight has a basic slash attack (which can be upgraded) along with a bounce attack similar to DuckTales.  Items add ranged attacks or defensive capabilities.  It had been a while since I had delved into a old school platformer like this one, so I had to undergo a lot of trial and error to beat a few levels.  Once I had completed the game, it was incredibly satisfying.

The greatest challenge I faced were the boss battles.  Conveniently, checkpoints are located right before the battles and you can easily regain the loot you lose when you die, although the bosses still took me some time.  After beating a particular tough boss, I checked YouTube for how others had managed, and it appeared the optional items can really speed up these fights.  In the end game (SPOILER) you must take on all the previous bosses one after another.  Having honed my rusty skills throughout the challenge of the regular game, this fight was intimidating, but did not ultimately take that long for me.  Why is that relevant?  It shows that the game really does build up your confidence and skill progressively, making each encounter more challenging, but not unfair.

Overall, Shovel Knight is a tough classic platformer that adds modern features that help ease frustration while maintaining its roots.  Precision platforming and strong bosses are balanced with checkpoints and lack of game overs.  I’d really like some of these features in games of old (Megaman for instance) just to make things a little easier now that I do not have oodles of time to throw at it.  I consider that high praise.

Shovel Knight’s secret success is in the additional factors.  The music is spot on for the 8-bit feel, and matches the environments in each level.  The sound also follows, with the pings of loot and hits of the shovel feeling satisfying with each effect.  Characters are not voiced but they shouldn’t be — a modern upgrade here would have diminished the game.

Replayability is high.  The game is not particularly long (6-8 hours), but packs a lot of additional content.  First, there are the secrets you may have missed on the first go round.  Second, there are leaderboards and speedrunning ingame, that will appeal to those who have the skill to move up (not me).  Lastly, there is a large DLC that lets you replay the game from Plague Knight’s perspective, with all new attacks and levels.  This is a really cool twist after completing the main game and helps satisfy any lingering need for hard platforming.  In addition, there are cheats activated through different profile names (you get four profiles) that can add a fun way to replay the game.

Shovel Knight is an all around solid, fun experience.  The difficulty may be frustrating at times, but the blow is lessened with built in help.  The progression, themes, and level uniqueness keep the game fresh throughout its shorter playtime, with additional modes giving length for those that want it.  Overall a great nostalgic trip to a bygone era, that patches out the pitfalls of the past with the refinement of the future.