“The other day I had a lot of success flying in formation Bombers.  Now I’m intrigued to replicate that success with a larger number of ships.”

“My list was created as a response to an imperial bomber list I got completely annihilated by in my last game against Nick. His bombers are able to acquire target locks at any distance and joust, but nothing in it has a great dial. Thinking through the ships I’m familiar with so far in 2nd Edition brought me to the E-Wing, which can also acquire target locks from any distance. It also has one of the best dials in the game, making it the obvious choice. However the E-wing is very expensive, and I wanted 3 ships, so instead of another E-Wing I took a U-Wing and a T-65 X-Wing. To pilot the E-Wing I chose Gavin Darklighter, in part because he’s a prominent character in the Rogue Squadron EU book series I’m reading, but mostly because he’s the cheapest named E-Wing Pilot. Red Leader Garven Dreis was chosen for the X-Wing, and Heff Tobber for the U-Wing, more on them later.

The idea was to build around Gavin’s E-Wing and make sure it can use it’s maneuverability to stay out of arc of the bombers and launch Proton Torpedoes. I gave the X-Wing Torpedoes as well so Dreis could add some firepower and use his ability pass a focus token to the younger Darklighter since they’re both initiative 4. I was hoping this synergy would help, since in 2.0 green tokens are tougher to come by. Both ships also have munitions failsafe, which I have learned is very useful when taking the 9-point-for-2-use Proton Torpedoes to give you some insurance against really bad rolls. They also both have R3 Astromech which I consider to be the only usable Astromech Droid right now.

The U-Wing pilot’s ability allows it to get bumped by an enemy ship, and then perform an action. This works well with Tactical officer, which changes the red Coordinate action to a black action. I also gave this ship Intimidation which makes ships at range 0 roll 1 fewer defense dice when attacked. As long as this ship remains unstressed, it can use it’s medium base to fly into traffic and make it easier for the other two ships to start doing serious damage by coordinating actions and taking green dice out of my opponent’s hand.

When I found out Nick was flying a Tie Swarm, which I’ve heard are very good in 2nd Edition, and not his bomber list from before I was pretty optimistic about my chances. I need to allow Nick the space to fly his Ties into each other and mess up his formation and I will be able to pick them off one at a time. Meanwhile I can fly the U-Wing right into the thick of it and coordinate each time one of the 6 fighters accidentally hits me. How could this go wrong?

All ships simply advance forward, staying in steady formation.  No shots for now.

All ships simply advance forward, staying in steady formation.  No shots for now. 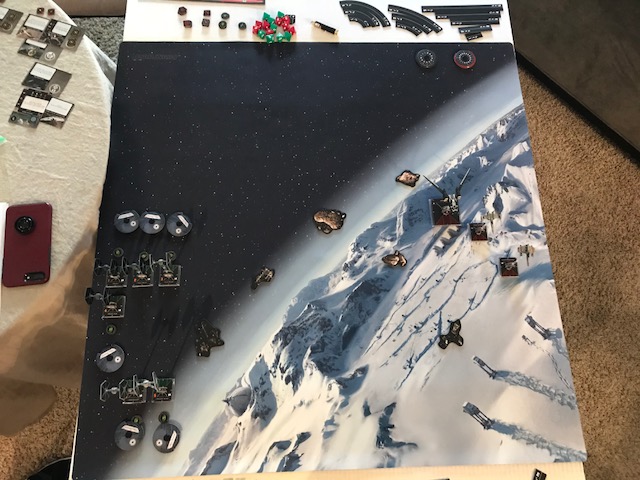 All ships simply advance forward, staying in steady formation.  Rebels take a slight turn in.  No shots for now.

The TIE block all K-turns back toward their own board edge.  The rebels complete there turn in to the middle of the board.  No shots fired.

The rebels curve in, taking multiple target locks against various TIEs.  The TIEs move in block formation forward, switching the ships in front and back.

Finally some shooting!  Rudor shoots at Gavin dealing no damage post-evade roll.  Mauler Mithel shoots at range 3 at Gavin without any damage.  Likewise with Howlrunner.

The U-Wing plows straight ahead and causes a mass bumping of the TIEs, with the E-Wing and X-Wing falling right beside.  The E-Wing fails to barrel rolls and the X-Wing took a focus, intending to share it with friends later.

Mauler Mithel, Howlrunner, and Night Beast shoot and fail to do damage.  Wampa, utilizing his ability, puts one damage on Gavin.  Rudor adds one damage to Gavin, and Rudor takes the final shield off the E-Wing.

The Rebels respond beginning with Garven, who fires at Rudor, blowing him up and passing his focus onto Gavin with his ability.  Gaven, with his new focus token, shoots at Wampa, dealing one damage with three hits and two evades.  Finally the U-Wing fires at Wampa with 4 attack dice, dealing one critical with the help of Gaven’s pilot ability.

With the chaos on the edge of the board, everyone on both sides just piles in and bumps each other.

The three Rebel ships return fire.  Garven’s dying attack killed Gideon in one last rebuttal.  The other ships fail to add any damage.

The TIEs begin to clear a bit, but the trailing TIEs bump into the front ones.  The U-Wing takes a hard left 2, but is still stressed.  Gavin bumps ahead.

Howlrunner shot one crit at Gavin.  Mauler Mithel fails to add any damage.  No Rebels are in arc.

The U-Wing continued to turn around, while two TIEs moved straight ahead, and Howlrunner and Mauler Mithel both turned into the E-Wing.

Night Beast fires at range 2, dealing no damage.  Mauler Mithel fires and deals one critical damage, dealing out two stress tokens.  Gavin returns fire at the TIE block, shooting Mauler Mithel, and dealt zero damage.  The U-Wing was out of arc, along with two TIES. 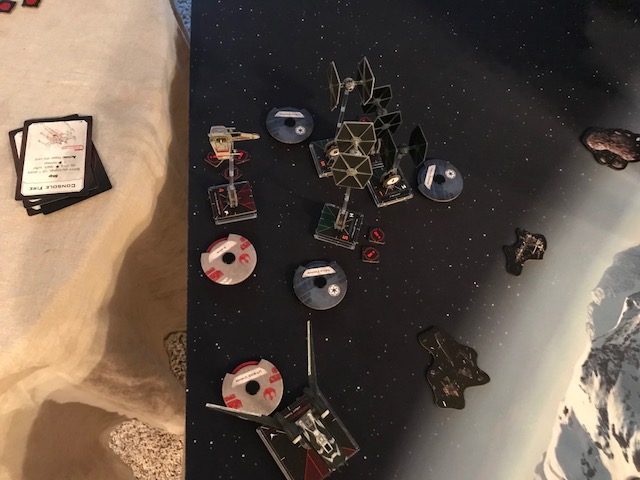 Two TIEs K-turn move to get shots.  Two other TIEs move out of arc toward the edge of the board.  The U-Wing pivots around, while the E-Wing speeds forward 4 to lose some stress.

Wampa and Howlrunner fire and deal no damage through the evades of Gavin.  The U-Wing also fails to add any damage.

The TIEs all one hard to turn toward the fleeing the E-Wing.  The U-Wing moves up and finally gets a focus.  The E-Wing moves right into range of a close range Wampa.

Wampa blasts the E-Wing out of the sky, while Night Beast adds one damage to the U-Wing.  The U-Wing fires all rolls three focus, leading to no damage. 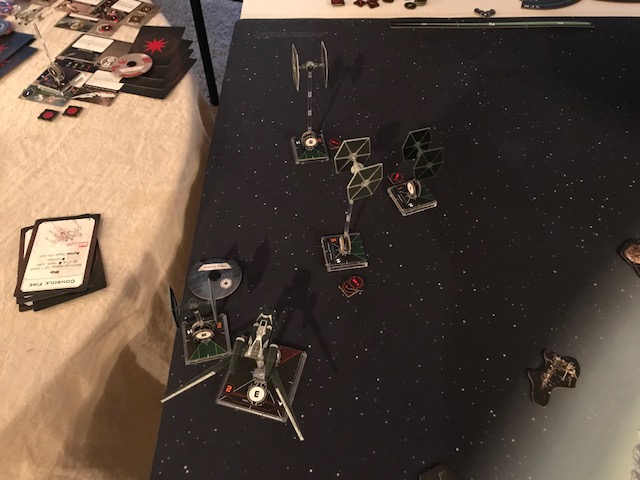 Wampa runs away with one health.  Night Beast K-Turns behind the U-Wing.  The U-Wing surprisingly does a two bank towards the edge of the table.  Mauler Mithel flys away to clear stress.  Howlrunner moves two straight, also clearing stress.

Night Beast, the lone ship in arc, fires at the back of the U-Wing and does one damage.

Wampa K-Turns to get back to the battle, while the other TIEs at the other end also K-Turn toward the U-Wing.  The U-Wing, without much of a dial, 2-hards away from the board.

Howlrunner and Night Beast shoot the U-Wing from afar resulting in no damage.

Night Beast fires at the U-Wing, which evades the one hit.  The U-Wing fires at range one at Night Beast and also fails to do damage.  Wampa fires from afar, dealing a cheap two hits.

Wampa one-hards inward, while taking a focus.  Night Beast K-Turns and stresses.  The U-Wing moves a slight 2 bank while target locking Howlrunner.  Howlrunner then promptly bumped into the U-Wing.

Night Beast and Wampa combine to shoot the side of the U-wing for 1 damage.  The U-Wing takes a pot shot at Mauler Mithel doing nothing. 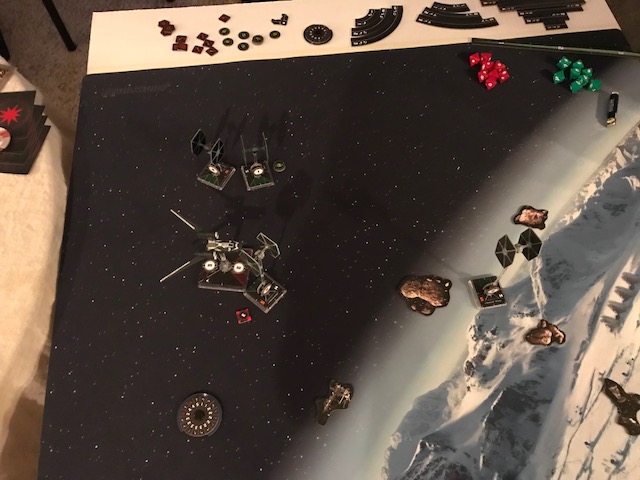 The U-Wing manages to create a huge cluster, where two of the TIEs bump into it, while Mauler Mithel turns in for a straight shot on the U-Wing dealing two damage.

The U-Wing stays put, thus putting all the TIEs out of range.  Mauler Mithel deals one lonesome damage, destroying the U-Wing, and finally putting Charlie out of his misery.

Result: Victory to the Imperials!

“Somehow Wampa survived all of that.  The Swarm is very stressful to play, and I had low confidence.  In fairness, this battle didn’t come down to my skill.”

“Well, theory and practice are… different. I set up in the opposite corner from Nick and planned to move around to his flank, arriving just in time to watch him start flying his ships into each other. Everything was going fine until the U-Wing, which only needs to remain unstressed to be useful, flew into a debris cloud and gained stress. This was completely avoidable and was simply haphazard and careless flying by me. In the future I need to slow down and remember each ship’s priorities. Similarly, the E-Wing, the platform around which this list was built, never acquired a target lock at range 3+. Why? Because I forgot to in turn 1 as I was trying to get to the fun part of blasting Nick’s Ties to pieces. These two mistakes really set the tone for the game. Having made them I set myself up for failure early on and was never able to come back.

I only got off 2 Proton Torpedo shots, one of which I used the munitions failsafe to claw back after only rolling 1 hit (even with 4 red dice and a target lock). This was a result of poor positioning and planning by me of course. In the future it’s important for both ships firing Torpedoes to have Focus tokens in addition to target lock. Truly that shouldn’t be hard to do with the U-Wing’s Coordinate ability and Garven Dreis passing off a Focus token after using his. This game I just messed up by letting the U-Wing take stress (sigh…).

In spite of my poor play I like this list, I think it has a lot of potential to be fun to play, and is balanced enough to not annoy my opponents too much. One tweak I’m thinking of is using an unnamed E-Wing Pilot. Gavin’s Ability is good but it may not be worth 5 points. Really, I just wish Darklighter and Dreis could trade ships, since it would be better to have the E-Wing acquire a target lock outside range 3, then get into range and get a focus token, while the X-Wing acquired a lock, then the E-Wing could pass focus to the X-Wing instead of the other way around. Alas, next time I use this list I will have to think that token-passing through further in advance.”