Particlebit:  This week we have another guest post from a previous guest poster, Nick, who blogs about writing a fantasy series over at The Cloak & Quill.

Sony’s Santa Monica Studios released their latest entry into the God of War franchise last April. Since then, it’s been heavily speculated to be one of this year’s inevitable Game of the Year award winners. Is that hype justified? I just finished  the game after playing it almost exclusively since release last spring–taking my sweet time to explore Midgard, Helheim, Niflheim, Muspelheim, and more. At the end of it all, I think the hype is well deserved and the game is one of the best available on the console.

This is not Sparta.

For those familiar with the original series (God of War, God of War II, God of War III  and the several PSP titles) this entry breathes a breath of fresh air into the franchise. Though the games are completely different, the new twist on God of War reminds me, in terms of the big picture, of what Nintendo managed to do for the Zelda franchise with Breath of the Wild last year.

The team at SIE Santa Monica, headed by creative director Cory Barlog, really reimagined Kratos and subverted a lot of what we’ve come to expect in the franchise. And those changes aren’t small. For starters, the Greek setting that inspired the games is gone. In its place are the frozen forests of Midgard and cast of gods from Norse mythology. These changes are also part of the reason that the franchise was rebooted on PS4 with the plain title God of War rather than the next numbered entry as “God of War IV”.

For me, not having known much about Norse mythology going in, this made the story a tad confusing at first. The iconic gods like Thor, Loki and Odin  are absent in the beginning and made it hard for me to immediately recognize who was who. This resulted in me failing to initially appreciate some of the deeper character motives. There is, however, an excellent reason for their absence that I can’t reveal without major spoilers.

Given my tangential familiarity with Norse mythology, one of the things I loved most about God of War is that it really does provide background, in the form of “Lore Markers” that Atreus can read and share. I learned a lot and it drove me to keep exploring to find more ruins, story panels, and listen carefully to the dialogue.

I wasn’t joking when I said that Barlog and company made some wild changes to the franchise. For one, the blood hungry and violent Kratos is now a dad, going through the same trials every parent does of raising a reckless and naive kid. The game starts off by showing you that Kratos has retired to his small shack in the Norse woods, and has a son now named Atreus. We never meet Atreus’ mother, since the game begins right after her having just passed away.  In fact, the somber mission that propels you on your romp through the Viking realms is a heartfelt desire to fulfil her final wish and scatter her ashes from the highest mountain in the land. Sounds simple, right? 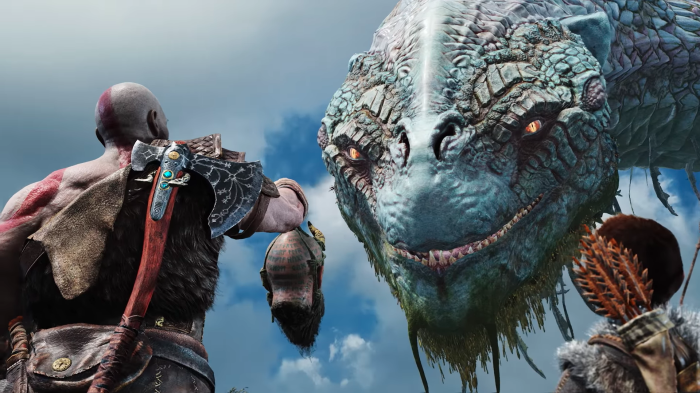 The rest of the game unfolds in the form of a journey to scatter her ashes that is both emotional and badass. There turns out to be quite a few complications along the way. Bickering comical dwarven armorsmiths. A witch in the woods. A lost magical eye. The World Serpent. Each complication furthers the bond between father and son, and builds more resolve to see the ultimate task through to the end.

It sounds gimmicky, but the character arc that was written for Kratos truly is one of the best I’ve ever seen. The writers manage to put a well-known franchise character through a believable (and very touching) growth experience. I was deeply invested in the journey to scatter the ashes of a wife and mother I had never met. More than once I bought into the idea that I had to beat a difficult boss to get to the mountain. The story truly is the best part of this game–which says a lot because the game also features some epic combat mechanics that I’ll visit in just a bit.

Kratos’ iconic bark at Atreus and their developing relationship almost never saw the screen. Cory Barlog has been very open since the game’s release (perhaps in some kind of victory lap) about the challenges he had to overcome to achieve his vision for God of War.

If he’s to be believed, many at Santa Monica Studio resisted the new direction. Some even accused him of ruining the franchise, preferred an Egyptian setting to a Norse one, and wished Atreus had never been written into the game. A “side-kick” little boy with a bow and arrow wouldn’t fit in, according to some on the team. And the programming required to make Atreus a believable companion, who could help solve his own puzzles and not drag down combat was said to be too difficult. It actually went so far as the lead AI director taking Barlog on a tour of Naughty Dog to try to explain to him how hard the character Ellie had been to program for another Sony game: The Last of Us.

Barlog fought back though, and stuck to his vision as most great creators do. I’m glad he did. Atreus is a phenomenal addition to the franchise and the AI is spectacular, given how hard it reportedly was to pull off. He’s almost always on-screen, and was always useful in combat. His arrows stunned enemies and saved me more than once. In addition, the segments with puzzles that required Atreus to uniquely solve them were always enjoyable and did not slow me down. All positive trade-offs in order to get the core of the story in the game– the relationship between a father and son after the passing of the mother.

Become the God of War.

All of this gushing about the story, sentiment, and world-building isn’t to say that the core element of God of War isn’t there. You get a new tool: the Leviathan Axe, which deals frost damage and includes a fantastic throw and recall mechanic. That mechanical both beats enemies into a pulp from afar and helps you solve puzzles by freezing gears and doors into place. And there really is nothing better than blasting a flame troll four times your size with a barrage of ice needles you just pulled up from the ground, and then jumping on his head to drag him down by burying an axe in his skull.

More new weapons and old friends come into play as you progress and the mix of weapon mechanics, abilities, combos, elements, and puzzles is fantastic. Just enough to keep you thinking about which weapon to use in a given situation, but not overwhelming or requiring a lot of stat comparing and menu management.

Speaking of menus, upgrading Kratos with ruins, enchantments, and armor was a lot of fun for the first half of the game. I was constantly visiting the dwarves and crafting new armor, upping my stats. Usually, any difficult battle could be solved with a visit to the forge.

But by late game, it almost became too technical. When I was approaching the end of the story, I wasn’t in the mood to go grind for some absurdly difficult to find materials in the realm of death or flame. I just wanted to be blasting through some enemies. I never felt overpowered, which is a great challenge for the majority of the game, but by the time I got to the payoff in the story I wanted to be ripping enemies apart with ease. It never quite got there, despite being a lot of fun.

Overall, this entry stands out, alongside Horizon Zero Dawn, Uncharted, and The Last of Us, as another amazing Sony exclusive. I have no doubt it will be nominated and win many “Game of the Year” honors, and it should for its gorgeous graphics, creative gameplay, and fantastic and engaging story. I’m hoping for a sequel and, after God of War became the fastest selling Playstation exclusive to reach 5 million sales, I’d bet that Sony is too.

One thought on “Guest Post: Father & Son: Reviewing the Latest God of War”