For the past two years (2016, 2017) I’ve set out what games I’ve staked out as most interesting (and therefore my likely purchases) for the upcoming months.  This year, it’s a little less Switch (given that Mario and Zelda already made their gigantic splashes this year), and more PS4 and PC.

I’ve also noticed that I’m really looking forward to remakes and expansions compared to complete new games.  I’ve thrown in a couple of honorable mentions that are more of a tier 2 of personal hype, but deserve a mention.  And of course, I need to throw in a title that probably won’t be a 2018 release, but we’d all like to see it come through.  Without further ado:

In my post-E3 hype post I had an early eye on the re-release of this fantastic classic PS2 title.  For those unaware, Shadow of Colossus was the follow up to Ico and was originally released on the PS2 way back in October 2005.

The game pushed the envelope and conversation of “Are Video Games Art?” argument, as the game had amazing visuals and was a highly unique experience.  The player controlled a single character, without much of any background, who brings a horse, a sword, and a bow.  There are no items, no other characters, and no defeating swarms of enemies.  Instead, you ride on your horse defeating giant boss after giant boss (16 bosses total).

Each boss was highly unique in its presentation and “trick” to defeat it.  The general mechanic was finding a way to scale each gigantic beast to find its weak point, and then stab the creature until it goes down.  Simple premise, but presented in an amazing fashion.  It’s more of a puzzle game than action game.

The game had an initial successful launch on PS2, and was actually remastered and released on PS3 in 2011 (and was bundled with its spiritual predecessor Ico).  For this newest Playstation-exclusive release, the game has been remade from the ground up, with enhanced visuals and environments.  Supposedly, they have preserved most of what the original game provided.  I wonder if the at-times awkward controls of the original will be retained — it was argued that this control flaw was an intentional design to reflect the exhaustion/inexperience of the player.  We shall see quite soon.

While I have intentionally tried to shield myself from some of the reveals of this game, I am still pumped to give it a try (hopefully) this summer.  Detroit is David Cage’s next installment in a choice-based story line of games.  His prior games have been somewhat divisive, but they have brought some star power.

Detroit brings us three android characters, each with unique motivations and attitudes.  In the vein of Heavy Rain and Beyond: Two Souls, the player controls the current character in a third person perspective, moving around and interacting with the scene and seeking to uncover information to figure out a greater mystery.

Many players have not been happy with the reliance on Quick Time Events in David Cage’s games, but if there was a game that implements them well, it’s these.  Many times, the QTEs are actually decision-making button presses, trying to talk or interact with others, similar to Mass Effect (but with less obvious results).

One unique aspect to all this sleuthing, investigating, and interrogating is that the game has multiple endings, but not really “game overs.”  If you fail a QTE event, that might just end that characters storyline, adding their death to the future decisions of the other characters.  Therefore, you can get some varied story lines, but also never need to go back and replay something just to get through a QTE.

Personally, I was a fan of Heavy Rain despite the memes and other unintentionally funny moments in the game.  Generally, I enjoyed following the story and the slightly slower pace of the game.  Not having to redo any of the QTEs, and knowing that your decisions do matter (and there’s no going back), makes it feel like every action has some weight.

We know the game will have some awesome graphics and hopefully an interesting story.  The futuristic sci-fi theme has caught my eye, and I’m excited to give it all a try.

As I mentioned last year, I have a soft spot for RTS games, and that inclination was built on the back of hours spent in online lobbies for Age of Empires (the original).  It was my first time joining a clan, one of my first real efforts in online gaming, and also pretty competitive.  I learned about build orders and balance, and also the plethora of online resources for strategy.

Age of Empires originally released in 1997, and was given a subsequent expansion the following year.  AoE set the standard for RTS’s in the late nineties, building off the work of Warcraft and Starcraft, and spawning Age of Empires II and Age of Mythology.  The RTS surge of that time reminds me a bit of the subsequent rise of MOBAs, displacing the “old school” RTS games as the big, popular multiplayer PC strategy titles.

While I am highly excited to see this game re-released with “modern” upgrades attached, I am highly wary of Microsoft’s prior treatment in the series.  While Age of Empires II HD was a solid re-release, and even had nice expansion packs, I was highly disappointed with the re-release of Age of Mythology.  The game barely worked, had many bugs, and little to no effort was spent to make the online community thrive.  If that same attitude accompanies Age of Empires Definitive Edition, it will not last longer than a couple months.

Let’s hope the game gets a solid online community, consistent balancing treatment, and ongoing upkeep to continue the lineage that all started in 1997.  The game has already been delayed, so the release date is always subject to change, but a delayed game is better than a bad game.

This one has already been released, but I am back on the Total War: Warhammer hype train.  When I first did a post of this flavor, I was big on the release of Warhammer’s Total War entry and have become quite a fan of the game despite its shortcomings and expense to get all the DLCs.

Tomb Kings are near and dear to my heart, being my most played Fantasy army in 6th through 8th editions (RIP Warhammer Fantasy).  I’ve always loved the flavor of the Egyptian undead, and really enjoyed their Incantation magic mechanic.  I also played them in several tournaments, and they always served me well despite being a lower power tier of army.

Total War: Warhammer has taken a lot of flak for their pricing model, requiring two base game purchases as well as a variety of $15-$20 packs of DLC content.  It might be on the high side, but that doesn’t make the game itself any less fun.  With all the interesting variety in the races and units, its definitely my favorite Total War (although I’m pretty biased).

Yes its already released, but its only been a week and I have been anticipating it for awhile now.  Hopefully this one keeps up my high expectations for the series, and adds a little something different from the more gothic undead Vampire Counts.

I never did fully complete the first Ni no Kuni, but I initially got interested when it made its way onto Twitch.  Once I finally got the game, I loved the visuals and the style.  Only problem was it drug on in many parts, as well as the bevy of tutorials and lack of control in some combats.

Therefore, the second entry has a path to redemption for me, and I’d be excited to give it a shot.  I’ve always thought that Ni no Kuni would be great if they could get it onto a handheld, and with the Revenant Kingdom on the PS4, remote play on Vita will finally be possible.

I probably won’t be getting this at release, and I’ll definitely be looking at reviews before making any kind of purchase, but Ni no Kuni II has definitely caught my eye, and I hope that it can deliver.

I am a big fan of the Donkey Kong Country series, beginning in the SNES days.  I was happy when the went for the reboot on Wii with Donkey Kong Country Returns.  That game was surprisingly difficult and frustrating, but was one of favorites on the Wii.

I never got Tropical Freeze on WiiU nor its handheld counterpart.  I heard that it improved on a lot of things from its predecessor, but at the time I had done enough platforming.  Putting it on the Switch is a good move in my opinion, and I’d definitely be interested in buying a decent port of a title I never got around to the first time.

Probably Not Happening This Year:

I’ve posted about this game in the past, and there’s only been small peaks at what it contains so far, but I am definitely excited about a main line entry in the Kingdom Hearts series. 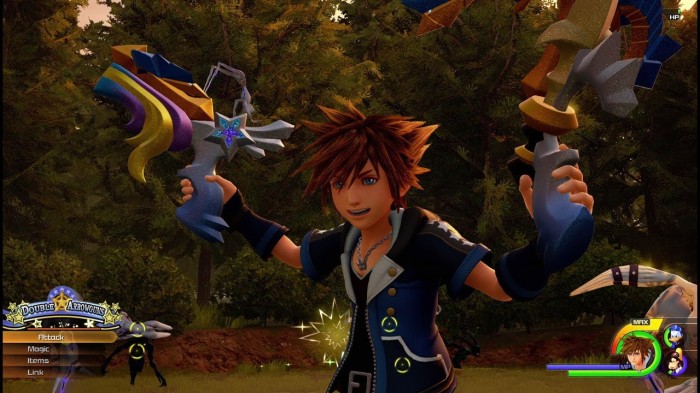 The PS3 and PS4 collections were the perfect teasers to what some rejuvenation can do for this now iconic series.  Some of the trailers have ramped up the hype, particularly for me the Toy Story parts:

Only problem is we are not likely to see KH3 this year, but hey, one can hope.  With both KH3 and the FF7 reboots in the works, Square Enix is sitting on multiple potential gold mines.

I’ve noticed that the games I’m most interested in are all releasing in the first half of the year.  I suppose I am afflicted by recency bias, but I’m sure that once E3 rolls around, I’ll have my second half of the year titles all picked out.

I’ve given my top titles for this upcoming year, what games are you super hyped for? Comment below!