As I wrote about previously, I’ve started up playing X-Wing, which is a board game/miniatures game hybrid.  Given my Warhammer-infused past, its been nice to get back into a miniatures game, but without having to spend loads of money or time painting.

Over the past couple weeks I’ve also managed to find a good weekly playing group and grow my fleet.  Being completely new to the game, I’ve had to learn a lot so far, so I will outline here how I am trying to transition from rookie scrub to (hopefully) seasoned pilot.

Today, I want to discuss how I’ve approached the game and expanded my collection, along with how I’ve managed to find a good gaming group.  This post is intended to be readable for anyone, and doesn’t require any knowledge of X-Wing.

So X-Wing has found a great formula to get its players hooked – each ship comes in an “expansion pack” for roughly $15, and contains the ship, some game tokens, the flight stand, but most importantly, collectible cards.

The cards include both the pilot cards you use to denote the pilot of the ship, as well as the smaller upgrade cards which are added onto the pilot (each pilot can take certain upgrades) to get a point value for each ship.

FFG has cleverly (and annoyingly) put many of the stronger and desirable upgrades into ships that are generally weaker statwise.  The effect is that you may end up buying ships simply for the upgrades and less so the cards.

With this in mind, I have tried to efficiently collect Rebel-faction ships to maximize the variety in upgrades, pilots, and synergies.

I started with the Force Awakens Core Set which gave me an X-Wing and some good starter upgrades, along with the dice, rules, templates, etc.  Next, I got the “Heroes of the Resistance” box which has the Millennium Falcon, another X-Wing, as well as a slew of good upgrade cards.

At that point, I had built a nice core of variety and decent ships, but I’ve become somewhat addicted in maximizing my expansion purchases to not only grow the number of ships, but utilize the included upgrades to their utmost potential.

I’d been eyeing two unique ships – the captured TIE Fighter courtesy of Sabine Wren as well as the Wookie Gunship.  Both were a little different and I had seen some YouTube videos featuring both.

Thus, I began to scour my local area of where to find ships.  Turns out Barnes and Noble is a big carrier of X-Wing products, as are a few of the local game shops.  I’ve always tried to purchase things at the game stores in order to #Support YourLGS.

So I found a local shop that had both the TIE and the Wookie ship in stock and purchased them both.

Of course, I couldn’t stop there, I also purchased another little something different in the H-6 Scurrg Bomber.  Captain Nym has become a mainstay in tournament lists, but the ship itself comes with some cool upgrades and also drops bombs, something I did not yet have.

At the same time, I have also been keeping an eye on eBay for good deals.  Specifically, looking for single upgrade cards that come in Imperial and Scum expansions I do not want to buy just yet (sticking to Rebels for now).

I had not used eBay in many, many years so I had to make a new account.  eBay has really cleaned up since I was last using it, with a slick app that makes searching and watching and such pretty straightforward and easy.  PayPal still has some issues but is better integrated into the system.

eBay sellers will list not only X-Wing ships but also single upgrade cards.  The trick is finding a decently priced card that makes it worth it to avoid buying the whole ship.  For instance, I bought a C-3PO card for $12, which otherwise only comes in an a currently out of print large ship retailing for $70.

Finding these deals is fun as the market for single cards is still in its infancy, at least compared to Magic.  Further, I really enjoy the “Best Offer” feature on eBay now.  Basically, you get to make an offer to the seller and they have a day or two to accept or counteroffer.  This little bit of bargaining is a game unto itself, and I used to get that C-3PO card at (what I think) is a good price.

It hasn’t all been expansion and acquisition – I’ve also managed to rack up quite a few matches with my squadron. 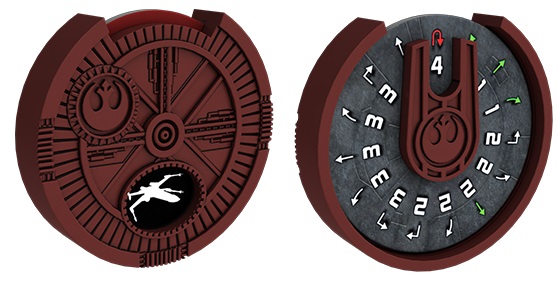 There are a couple spots in my area that host game nights, and they vary on competitiveness vs casual atmosphere.  Luckily, I found a newer game shop that is real easy to get to, and has a great group of people that are willing to help a newer player like myself.

Further, I’ve managed to play against a variety of ships and factions including Scum and Imperial.  I’ve even managed to start winning a bit, or at least staying competitive and not just get hosed every game.  All of this buying may start an in-store arms race to outdo the new ships of the others.  Perfect business for the store.

I highly encourage people to check out their local game store and see if they have any open gaming nights.  I’d heard online that the X-Wing community is welcoming, and I have to agree.  Having been a part of other gaming communities where that is not the case, it was refreshing to see patience and excitement from longtime players bringing in new players.

I plan on going more in depth on my lists and actual games in another post, so I will save that for the future, but I will say that I have really enjoyed the Rebel playstyle of tanky ships.  While the Imperials have their fancy barrel rolls and agility dice, the Rebels have chunky ships with synergistic defensive capabilities.

In addition, I’ve found the learning curve on X-Wing makes it very easy for newer players to quickly get up to speed.  It doesn’t hurt that the games are often an hour or less, and that squads normally contain 3 ships or less.  Getting up to snuff on the rules has been fairly straightforward, again, a welcome change from other, more tedious, wargaming systems.

Plans for the Future

After all that, I’ve firmly planted myself in the X-Wing fray.  I’m already getting excited for the new announced releases, that will be coming alongside the new movie (which I am also hyped about).

For the more immediate future, I am thinking of picking up the Ghost expansion, and possibly the E-Wing. The Ghost is one of the largest ships available that doesn’t cross over into Epic (special game mode of X-Wing using the huge ships).  It’s a bit expensive, but I think it would be a fun ship to fly, and also comes with some great upgrade cards that will help kit out some of my existing ships (see? This is what I look for!).

The E-Wing has also caught my eye mostly for Corran Horn, who I am not familiar with in the lore.  Regardless, I have seen him flown on YouTube, and that has been a source of inspiration.  While the ship design itself seems rather plain, getting all those fun actions with the barrel rolls and boosts looks like an Imperial ship.  Plus, I can pair him with Nym or Ahsoka for some shenanigans.

I know Imperials and Scum will eventually make it onto my list of next purchases.  For now, I want to finish off Rebels before expanding into a new faction.  I think that Kylo TIE Silencer might be the key starting point for a potential Imperial list.  Time will tell.

4 thoughts on “Building Up My X-Wing Fleet”