Hour of Devastation joins the Standard metagame at a time when the format has yet to really form after the Marvel ban.  The next Pro Tour will surely showcase some spicy new brews, but until then we will have to trawl the 5-0 decklists on MTGO.

Today, I wanted to give some quick thoughts on some cards that I think will make an impact on Standard.  While a couple of these may seem obvious, I’ve got a sleeper pick for those that want something new.  Without further ado: 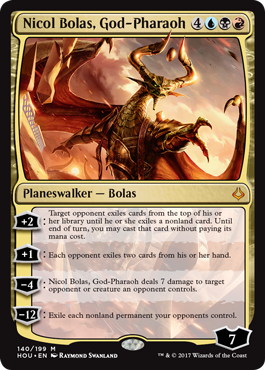 The big bad villain we have all been waiting for is finally here.  Nicol Bolas is back and this time he looks like he can actually cause some havoc.

At seven mana (and in Grixis colors), the God-Pharaoh needs to have an immediate, possibly game ending, impact to justify inclusion in Standard.  Starting off with 7 loyalty gives some resiliency, and both plus abilities are relevant.  The +2 gain hopefully gain a permanent to get ahead on board, or it could even rip a removal spell to 2 for 1 the opponent.  The +1 to go after the hand is also a strong first effect.

The close-out abilities will need to find their place.  The -4, deal 7 is a big cannon.  That kind of damage can finish off weakened opponents, and pretty much all currently relevant creatures other than Ulamog.  The ultimate can really turn around a game against mid-range and aggro.  All in all, Nicol Bolas will be finding a home in control in Standard.

The namesake of the set, Hour of Devastation is giving red an effect it has lacked for awhile.  Despite the popularity of red sweepers like Sweltering Suns and Radiant Flames, neither option was able to get the medium to big creatures off the board.  Neither could do anything to planeswalkers.

Now, Red decks can clear pretty much everything on turn 5.  Notably, Gideon, and therefore Mardu, will fear a turn 5 from red control decks lest their entire team get wiped.

As an added bonus, the card deals with the recently popular Selfless Spirit by negating indestructibility.  This also has some incidental application against the Gods, although those have not seen much play outside some GR decks with Hazoret or Rhonas.

Furthermore, given that UR has been the go-to control build of late, Hour of Devastation plays really nice with the 5/6 Torrential Gearhulk, thus slotting in nicely. Gearhulk can come down end of turn, flashback Glimmer, and then survive the Devastation and swing for 5. 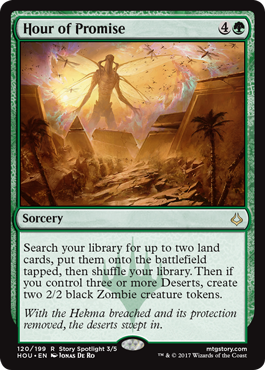 The green card in the Hour cycle introduces a viable ramp spell that will also boost Desert strategies.  While I’m not quite sure how far the Desert mechanic can be abused, going from 5 to 7 (or up to 10 the turn after) is a big game.

Wizards has held off from allowing big mana decks to flourish, taking away low mana ramp spells like Rampant Growth and mana dorks like Birds or Llanowar Elves.  Interestingly, the previous Zendikar block and Amonkhet were not suppose to exist in the same Standard, and now players can go fetch two Shrine of the Forsaken Gods to power out a turn 6 Ulamog. 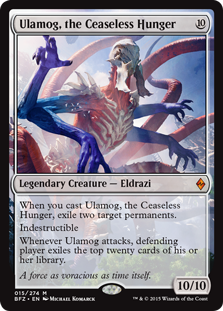 Just when Marvel gets banned, the big Eldrazi is ready to make a comeback being played fairly.  He’s not the only one though, World Breaker and other large creatures can be thrown onto the battlefield right after an Hour of Promise.

Hour of Promise will likely be played in a G/R Ramp shell utilizing Hour of Devastation and also the below mentioned Abrade.  I’m curious to see if the control builds packing Negates et al will be able to keep a ramp deck in check.  My guess is the deck will have some metagame presence until Ixalan rotates the big Eldrazi.

Previously mentioned, Abrade is the removal answer many red decks (which are now the control decks of the format) have long sought.  Magma Spray and Shock could only dent Sylvan Advocates and Whirler Virtuoso’s, and neither gave you incidental artifact hate.

Abrade will be an instant inclusion in many decks that need the utility.  Clearing out many of the common medium threats at instant speed is valuable in the current format.  Adding the ability to shatter Oketra’s Monuments and Gearhulks makes this card well positioned in Standard.

My more sleeper-esque pick for an impact in Standard, Grind//Dust could be a centerpiece in an as-yet-unexplored -1/-1 counter deck.  While Constrictor decks have doubled beneficial counters, I think the reverse could find itself as a tier deck going forward.

Grind is an entirely OK first play, with a low mana cost ,and multiple uses.  While it may be bad against some creature-light decks, its permanent effect can put Gearhulks in their own Hour of Devastation range.  Sorcery speed is a drawback for any surprises though.

Dust is priced a little high, but the effect can be positioned as a one-sided Wrath of God in the best scenarios.  While it interacts with its first half, I think setting up a board wipe with Archfiend of Ifnir to be a great application.  This implicates some cycling/discard possibilities, which interact well with the aftermath cards.

Given the list, G/R and U/R decks appear to gain the most from the top end cards of the set.  Both decks also appear to be a bit on the slower side, so the format itself might slow down from the days of turn 4 Ulamogs.

Either way, I think that both archtypes will challenge the U/W Monument decks in the early metagame before some new builds prey on the weaknesses of all three.  I think a cycling/discard deck might finally get an opportunity, and the New Perspectives deck also got a little bit of boost.  In sum, the format appears to be wide open for the time being, which will make for some developments over the next month.

5 thoughts on “My Top 5 Cards From Hour of Devastation”