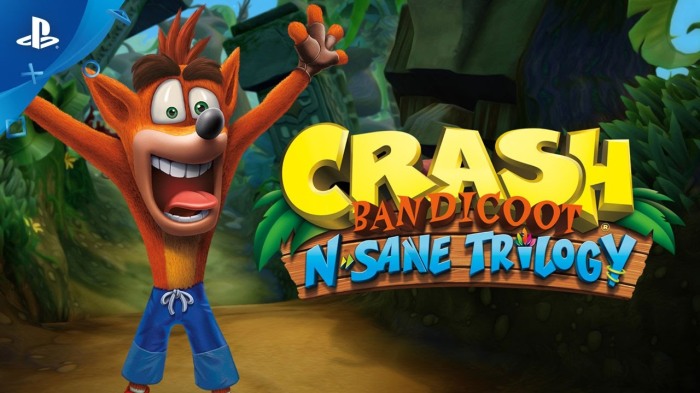 I am super excited to get my hands on this remake.  I greatly enjoyed playing through the series on the original PlayStation, and even enjoyed the first PS2 entry.  I also hope for the success of the title to (1) get a good new Crash game and (2) get a remake of the first few Spyro games.

This is all to say that Crash is what it’s always been: a charming collection of platforming challenges that shift gears from one stage to the next. By putting three games next to each other, the N. Sane Trilogy overflows with nostalgia. The warm and fuzzy feeling you get from seeing familiar Crash levels presented in a way that mirrors what you held in your imagination is undeniable. But so too is the reality that Crash games aren’t timeless… Vicarious Visions, for its part, succeeded in revitalizing Crash from an artistic perspective while preserving the charm that made him appealing when he first showed up, but years have passed since the original PlayStation was relevant, and we are well past the formative years of 3D gaming.

There’s a golden glow around memories that gets brighter with age, but it also tends to distract from old frustrations. If you’re ready for a quick trip — and I mean quick — down memory lane, Crash Bandicoot N. Sane Trilogy doesn’t disappoint. Vicarious Visions’ faithfulness to the series satisfies some nostalgic cravings, but once the novelty wears off, the cracks can’t help but show.

All three games blend together in a way, and I mean that as a compliment. There are slight variations like vehicles, locales, bosses, and power-ups, but the Crash trilogy sort of just flows from start to finish, to the point where you’d almost believe it’s one giant game. That’s just as true today as it was over two decades ago… It’s a shame what happened to Crash. Although Naughty Dog moved on to bigger things, I wouldn’t necessarily call all of them better. The Crash Bandicoot N. Sane Trilogy serves as a time capsule of sorts before the series was ran into the ground, and my only major regret is that I wish it had CTR as the cherry on top.

I didn’t want the Crash Bandicoot: N. Sane Trilogy to break what wasn’t broken. Thankfully, Vicarious Visions clearly didn’t want to either, and the studio’s reverence for the original maddening yet rewarding challenges that have stood the test of time is clearly on display. On one hand, that leads to the frustrating limitations of the original Crash Bandicoot persisting 20 years later. But it also results in the incredible visual and aural overhaul and the gameplay tweaks to earlier entries, like time trials and crate counters, that Naughty Dog added later in the series. Those additions make the overall package so much more cohesive while never forgetting what made, and what still makes, so much of Naughty Dog’s original trilogy a blast to play.

Not all games from yesteryear hold up well. The original Crash Bandicoot likely would drive people nuts if it returned in its original form. Vicarious Visions made it fun again, without altering its DNA – a feat that deserves recognition. Although Crash spins and jumps his way through most levels, variety was the key to this series’ success. Naughty Dog always included a different wrinkle or evolution of a concept in each stage, and that continues here. For all three games, the feeling of repetition never sinks in, a factor that goes a long way in making this trilogy a blast to play. It’s good to have Crash back in the limelight. I hope this isn’t the last we see of him.

Significant replayability and an excellent entry price point make the Crash Bandicoot N. Sane Trilogy a benchmark for how future classic game remakes should be handled, the originals left intact, imperfections and all.

Crash Bandicoot N. Sane Trilogy is a textbook example of an amazing remake. Taking three all time classics and mashing them together into a single package is great, upgrading the visuals is fantastic, and adding in a few subtle touches without impacting the game itself is the cherry on top. Players still need to keep in mind that these are PS1 platformers, with all of the gameplay limitations and design choices that that entails. Once you get past those rougher edges though this becomes an excellent tribute to one of gaming’s most iconic characters. Crash’s simple spin and slide mechanics found in the first two titles don’t offer much in the way of variety, and while Warped offers more abilities like the double jump and fruit bazooka, along with more interesting levels like ones with Coco on a jet ski or Crash traversing the bottom of the ocean, there’s still not enough side-content, nor an engaging storyline, to make the original Crash Bandicoot trilogy a must-have game in 2017.

As far as remakes go, you can’t get any better than this. Crash Bandicoot N. Sane Trilogy is exactly how fans envisioned it – an unadulterated celebration of a PlayStation pioneer. With such a weight on their shoulders, Vicarious Visions have pulled it off with such diligence, infused with a streak of their own creativity. Then there’s Naughty Dog original efforts, of course. Even those only acquainted with Uncharted and The Last of Us can appreciate how the studio first made its name, and the journey from Crash Bandicoot to Warped is one of continued innovation. Some two decades later, it’s great to see that some things never change.

Ultimately though, while it’s not quite perfect, Vicarious has a beautifully crafted remake let down only by its 30fps target. If you’ve been looking to revisit Crash, it’s difficult to go wrong with this package. It’s clear that the developers have poured a lot of love into re-creating these games, and if the aim has been to re-introduce this neglected mascot to modern audiences, it’s a job well done. Our hope is that this paves the way for an all-new Crash title – one that pairs the beautiful visuals of the N.Sane Trilogy with a fresh batch of gameplay ideas.

So, does the original Crash Bandicoot trilogy hold up? Two-thirds of me says “heck yes.” The first Crash Bandicoot may not have aged well, and there are portions of Cortex Strikes Back and Warped that are frustrating, but I had a ridiculous amount of fun with them. I felt encouraged to go back to find the remaining gems, see my best time, and explore the secret warp rooms. Vicarious Visions did a great job with remastering the Crash Bandicoot trilogy. Maybe we can see our favorite purple dragon done with the same amount of justice?

Have you tried out the new trilogy?  Do you think it will release cross-platform?  Comment below!