My brief break from extended RPGs has come to a close after finishing Doom and moving right along to a recent addition – Paper Mario: The Thousand Year Door.  So far, it’s been a nice change from both my previous main games.

So, Paper Mario: TTYD has been a game that I did not get to play the first go-round on the GameCube.  Turns out that was an error, as the game has become increasingly difficult to find, and has not had any re-releases.

I have played Paper Mario for N64, as well as many of the Mario & Luigi series, and of course the genesis of all Mario RPGs – Legend of the Seven Stars.  I just never got a hold of a copy of TTYD, mostly because I never really got into Gamecube.

Well, I have since been scouring different places for used copies of TTYD.  Sure, I could go onto Amazon and buy a copy for $50, but the exploration and find is part of the fun.  I had recollected all the PSOne versions of the Final Fantasy games the same way.

With TTYD, I was at a used bookstore which carries video games.  I was perusing one shelf when I noticed someone going through some Gamecube games I did not notice initially.  He was stopping and pulling out the better titles, such as Windwaker and Twilight Princess. 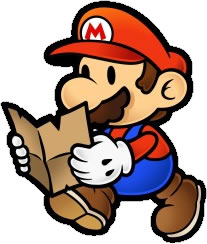 That’s when I saw it – Thousand Year Door.  The other guy did not seem to notice it and as soon as his finger went past the game, I swooped in and grabbed it.  Got it for about $30 total.  I finally found the elusive RPG after constantly keeping an eye out for so long.  Who needs Amazon?

With that extended collecting story out of the way, I have actually begun to play through the game I missed so long ago.  Being familiar with the gameplay of the Mario RPG titles, as well as hearing of the hype behind the game, I’ve had pretty high expectations.

In contrast to the more recent Paper Mario titles, TTYD is more “traditional” — you move about on the map, trailed by a swappable partner, collecting items and advancing the story.  When you make contact with an enemy, the battle commences.

The battles are turn-based but with the added bit of timing.  When Mario jumps on an enemy, if you press A at the right moment, you are rewarded with more damage or other beneficial effect.  Same goes for defense — timing grants you reduced damage.

Mario and his various friends have regular attacks and special attacks, along with even special-er attacks granted from collecting stars.  Further, you can customize Mario’s skills with badge points, which allow you to equip badges which have  variety of effects.

The story is fairly typical Mario fare, Peach has been kidnapped and you have to collect the stars to rescue her.  The value in the story and narrative is in the humor, which just has a certain flair that elicits chuckles throughout.

I’ve been enjoying the experience so far.  I was a bit worried that the game might show a bit of age, but so far, the basic mechanics remain fun and interesting.  Timing attacks and defense keeps things skillful, and strategizing with badges is fun too. 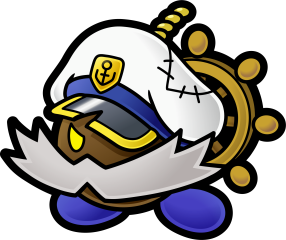 My biggest qualm so far has been in the backtracking that has occurred.  Several times so far, Mario will work his way to the end of a dungeon or castle or what have you, only to have to then go backwards through the trek, and possibly then BACK to the end of the dungeon.  The enemies typically respawn each time you enter the new zone, so it can get old fast.

All in all, the game still holds a unique charm that other games have yet to match.  The art style, timing-based battle system, and humor create a fun experience despite the age of the game.  Now that I’ve started the game, they will inevitably re-release it on Switch…

Have you played any of the Paper Mario series?  TTYD? Is Sticker Star your favorite in the series? Comment below!