No Man’s Sky has received impossibly high standards and levels of hype.  Well, the game is now out on PS4 and PC and the reviews are…less than spectacular.  However, given the games survival premise, many of the reviews are subject to change.

Given the controversy and diverse range of opinion over the title, here is a list of some popular reviewers and their takes.

Even if a hundred or more hours from now No Man’s Sky wears out its welcome, I’ll be grateful and still somewhat awestruck by what a tiny team of developers rejiggering decades-old design ideas managed to pull off.

There are wonders indeed to be found in the No Man’s Sky universe, but not everybody will be willing to put in the time and effort needed to discover them. This game is a technical marvel that patient, detail-oriented gamers will love. As-is, however, it demands a bit more time than it deserves. The universe is vast, but your inventory is small, and not everybody is going to want to make the long trudge necessary to become a galactic superstar.

An amazing technical feat but a shell of a game in most respects, No Man’s Sky excels at atmosphere and world-generation but its core mechanics are commonplace and unexciting as they come. Good, but not extraordinary by any means.

If you only concern yourself with exploring, mining, and buying goods, you may burn out on No Man’s Sky early. Atlas’ observations regarding these pursuits are apt, but even if you recognize these activities as shallow, they could be better with added depth and improved mechanics. No amount of clever, thoughtful writing can excuse these issues. That said, the way Atlas frames these activities and how it makes you consider them in life as well as in-game–that’s redeeming.

No Man’s Sky is immediately a massive game with impressive seamless transitions from ground to space, and it will entertain your inner collector for a while. The more you get to know it, the more you recognize its faults, and it’s easy to fall so deep into the act of exploring and trading that your focus narrows to those aspects alone. If, however, you consider everything it has to offer and listen to what Atlas has to say, No Man’s Sky becomes more than a collection of slightly different worlds in a seemingly never-ending galaxy–it becomes an examination of the meaning of life in a way that’s more valuable than all the gold or starships in its virtual galaxy.

No Man’s Sky struggles to resolve one central contradiction. The game was built to be infinite, and in practical terms it is. It’s an endless, edgeless field possibilities. And yet it needs an endpoint, or at least a set of waypoints, to give purpose to your journey – to give you somewhere to be headed. This isn’t just a matter of meeting gaming convention. No Man’s Sky is brilliant – perhaps peerless – at evoking the classic science-fiction voyage into the stars. The further you go, the faster you travel, the more you learn and the more you see; never look back, because everything left behind is gone forever, while nothing ahead has been seen before. But to fully answer this seeking impulse, the game first has to give you a destination that means something to you – and that is something it only haltingly manages to do.

With much of the No Man’s Sky’s structure having apparently been added in the final month of development, that’s not so surprising. (The patch notes are eye-opening; mere weeks ago, this was half the game it is now.) There is tremendous room for it to grow and improve. As it stands, it’s flawed but completely intoxicating, a unique work of engineering art to lose yourself in. Sean Murray and his team at Hello Games set out with one goal: to create a game that is science fiction. Mission accomplished.

Outside of the aforementioned muddled menus, the beautiful visuals and incredible electro-centric soundtrack cement all of those moments of wonder. I might not be all that impressed by the actual biomes, but even with the pop-in, it’s a serene feeling to fly around in space or on-planet. I initially thought of No Man’s Sky as something I’d want to get lost in for weeks on end like Minecraft, but I think it’s more of an “every once in a while” type of thing. It’s a chill time that’s at-odds with so much of itself. No, it’s not worth championing, nor is it worth rioting or fighting over. No Man’s Sky isn’t quite what I thought it would be. It’s a fun sandbox game that’s full of wonder, until it isn’t. Unlike other similar titles, the magic fades over time, because 18 billion planets (sorry, 18 quintillion) don’t matter if it feels like there’s only truly 20 unique ones. I wouldn’t recommend No Man’s Sky if you don’t like getting lost — but for those of you who do, wander away.

So No Man’s Sky isn’t flawless. It’s probably not for everyone. Then again, No Man’s Sky is exactly as described by the eccentric Sean Murray. If you’ve ever dreamed of being a cosmonaut, of starting with practically nothing and amassing a fortune, of becoming a notorious space pirate, or had any other of the countless sci-fi fantasies out there, this is probably the game for you. Now, those fantasies might not play out exactly as you’d have hoped in No Man’s Sky, but this is a game that begs those who put in the time to come back just once more and see what lies just over the horizon. If this game is right for you, you won’t be able to put the controller down.

On the PlayStation 4 version that we played for review, we also had a myriad of problems with No Man’s Sky even after the day one patch. I didn’t keep track of the number of times that the game crashed back to the PS4 UI and threw an error code, but it was quite a few. The game has an autosave feature, but when these crashes occur it almost always lost a good chunk of progress. So, say you just spent a half an hour doing an incredibly mundane task, and then the game crashes… you’re gonna have to do it again. There were definitely some frustrating moments because of this. The path system in No Man’s Sky seemed bugged as well. After playing 20+ hours on a single path, the inability to progress due to a lack of milestone progress made me have to abandon it completely. It seemed odd, and maybe it was just a bug. Though I never could find my way back to the path of the Atlas after having to abandon it. That said, for a game as massive as No Man’s Sky, the bugs and oddities were relatively little and didn’t hinder my enjoyment of the title in more than a few major incidents.

One of the most anticipated games of the year, No Man’s Sky is somewhat of a letdown. While it certainly puts its best foot forward with a beautiful audio and visual presentation, to put it bluntly, it’s boring. Ambitious as the universe that’s been created by Hello Games is, what lies within is a middling

I’ve seen so many planets, met so many aliens, and mined so much goddamn carbon and not once have I been surprised. Not once has the game thrown me a curveball. Every new location is just a different colored home for the same old routine, and the procedural generation means that things feel far less diverse than they could be – when randomized pools replace handcrafted designs, the lego bricks piecing everything together are far too obvious.

Like Spore before it, No Man’s Sky is a game that promised far more than it could ever deliver, but I can’t even blame my tepid reaction on hype. I did not for a second believe Hello Games’ vaguely described spacefarer could be anywhere near as varied and expansive as promised.

Even with my expectations guarded, however, I did not expect just another survival/crafting game that used randomization as a crutch to the point of losing all potential personality.

And I at least expected more to fucking do. 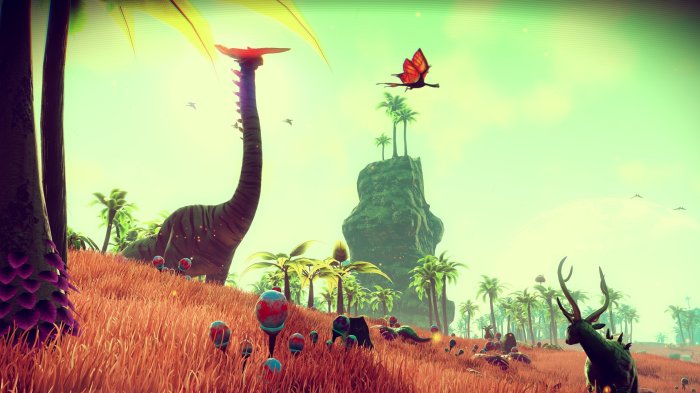 What were your thoughts?  Did it finally put Minecraft into space?  Have you found another player?  Is it worth $60?