Wolfenstein: The New Order brings a focused single player shooter experience that packs a surprisingly strong narrative amid the gore and bullets.  With a solid respect to the traditional FPS core of gunplay and great firefight environments, Wolfenstein presents interesting moral dilemmas without being distasteful.  The game is a solid entry in a storied series that is worth a playthrough. 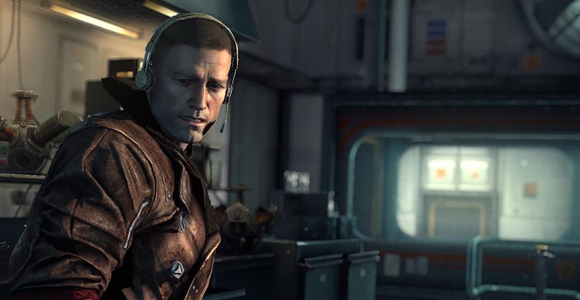 Imagine for a second that Hitler’s Nazis won the Second World War.  The United States surrenders and Europe is under the dominion of National Socialists, who have ramped up there human experimentation.  They have focused on fusing biological matter with machine, building even “smarter” machines to guard their power from insurrection.  Got that picture?  That’s the premise for Wolfenstein: The New Order, and it leads the protagonist, William “BJ” Blazkowicz on a bloody trail to mount a resistance.

The game begins before Nazism has prevailed; BJ and his faithful pal Fergus are dropped onto a Nazi stronghold in the middle of an intense firefight.  The huge fortress is home to one of the arch-experimentors of the Reich – the disfigured General Deathshead.  After breaking in to the lab, Bj and Co are taken captive by massive machines, and the first major story choice must be made.  In fitting fashion, it is sufficiently brutal to make you wince during the explicit cutscene. 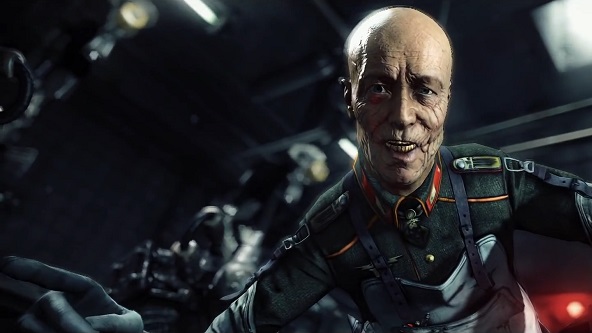 This sets up the revenge/savior storyline for BJ.  you are blown out of the fortress, suffering heavy brain damage, and institutionalized in a Polish clinic where you witness Nazi horrors without ability to intervene.  The family running the clinic is eventually murdered, you come to, and take the daughter and seek to revitalize “the resistance” with the ultimate goal of driving a stake through the black heart of Deathshead.

The alternative history angle is certainly interesting, and the game does not shy away from tackling tough issues related to a Nazi victory.  The player encounters abuse of the mentally handicapped, torture, human experimentation, racism, and concentration camps.  In my playthrough, none of these particular issues appeared trivialized or gratuitous, so they added depth and darkness to a surprisingly good story. 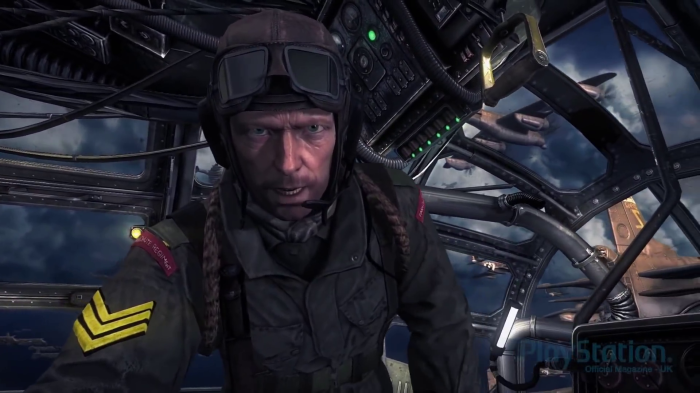 The characters that assist BJ in his quest are likable enough, with my personal favorite being Fergus.  The love interest of BJ – Anya – was not developed strongly.  I did not ever feel a need to further their dialogue with one another, but that may be expected in a hyperviolent first person shooter.

Some of the mission scenarios and plot development do require a slight suspension of belief or feasibility.  However, it is never to the point of complete ridiculousness, and in many ways accents the gung-ho bravado the game exudes.  Voluntarily entering a concentration camp and sabotaging its systems from the inside out to find a secret underwater lair?  Outlandish, but certainly in a fun and fitting way. 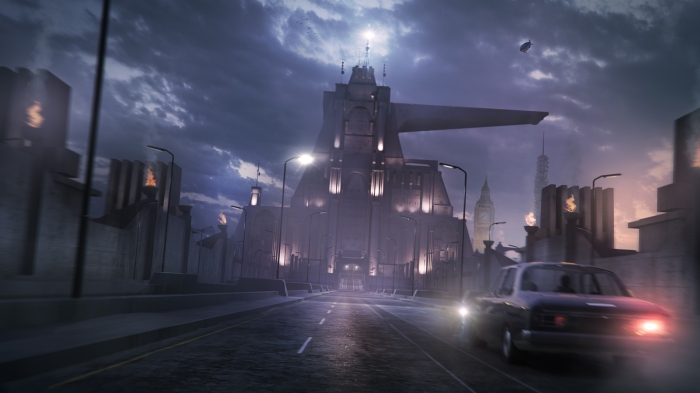 Immersion in post-WW2 Nazi life reveals itself in nuggets from discarded newspapers and posters BJ runs across in his step-by-step massacres.  Sometimes the stories are funny (alternate Beatles band) and sometimes dark (oppressive acts expected from a totalitarian regime).  The small pieces fit and do not detract from the run-and-gun aspects of the gameplay.

First person shooters have not traditionally been the bastion of story telling prowess.  Half Life and its successors changed that perception, and injected characterization and decent plots into corridor shooters.  Wolfenstein: The New Order builds on this legacy while staying true to its roots.  I picked up the game ready to shoot my way through waves of Nazis.  Instead, I began to get interested in why I was gunning down man and machine, and I was satisfied with the answer. 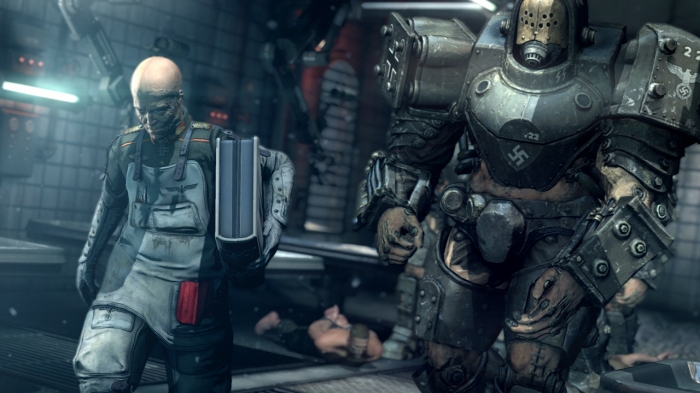 Gameplay in Wolfenstein: The New Order is tried-and-true FPS, with some stealth elements built-in.  The game does not reinvent how we view shooters, but stays close to its classic, expected roots, with a refinement that leaves the player satisfied.

The player has the traditional load out of guns and grenades, accessible via a quick wheel.  Most of the guns can be dual-wielded, including the automatic shotgun, which can lead to quick carnage.  In addition to shotguns, rifles, and pistols, there are also laser weapons and heavy mounted weapons, which give a solid variety of lead throwing devices. 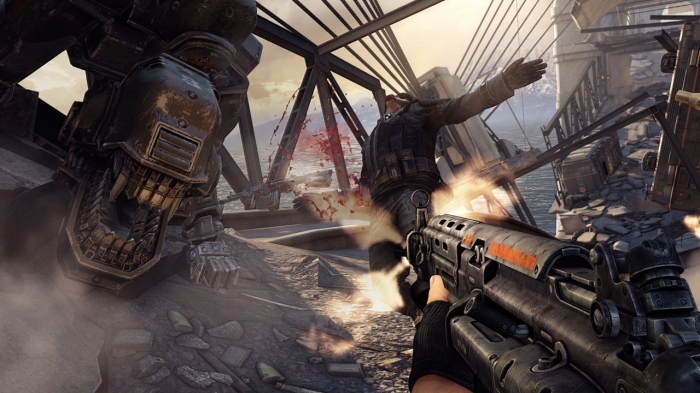 Enemies range from your basic rifle grunt, to mechanical dogs that rush the player, to lumbering robots with high firepower and close quarter prowess.  Wolfenstein manages to shy away from the “bullet sponge” criticism, and has solid AI to make each firefight somewhat challenging.  Further, firefights are augmented by a variety of environments , featuring different shades of cover and hidden backways to get better angles on enemies.  The gunplay itself is generally satisfying and responsive.

Health is supplemented by armor, and can be boosted by finding additional health packs that will take you above your maximum health for a short period.  I found this mechanic to particularly useful, as I tended to run in guns ablazin’ instead of seeking the more calculated stealth route. 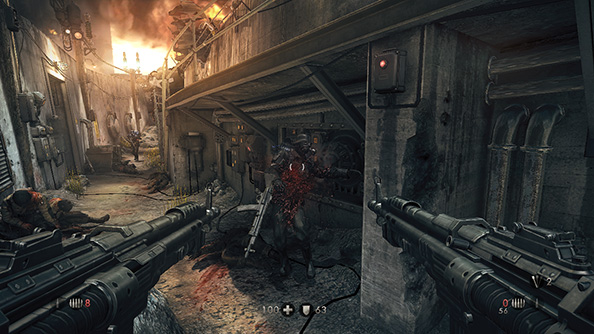 The stealth mechanic has players sneaking around through ducts, doors, and boxes.  Enemies can be taken down from behind, or dispatched with throwing knives.  The big advantage in being patient with stealth comes through the ability to easily take down Officers.  Officers are armed with a lowly pistol, but have the ability to sound the alarm and trigger further waves of grunts while retreating.  These waves can continue until you seek out and take down the Officer.  If you start shooting early, you are going to have to wade through a horde of armored grunts to get to the Officers. 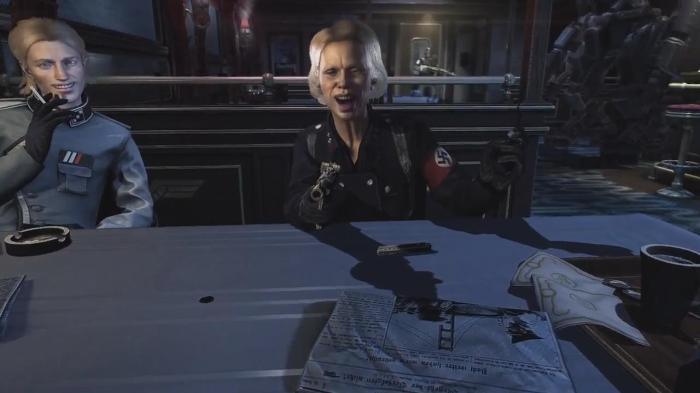 While the gameplay in Wolfenstein is far from groundbreaking, it manages to present a well-polished product.  The game hits its expectations for what a modern first person shooter should be, and presents it in a slick, modern format that leaves you feeling satisfied.

The graphics are generally superb, as the game does boast a massive file size on PC close to 50 GB.  Lots of gore is packed in, both in cut scenes and in live action gameplay, and hits on a visceral level at times (see the note in the narrative section above).  However, it fits snugly in the one-man killing machine style the game firmly rests its chips in.

The sound and effects are solid, with the voice acting matching well with the characters personalities.  I enjoyed Fergus’ accent in particular. 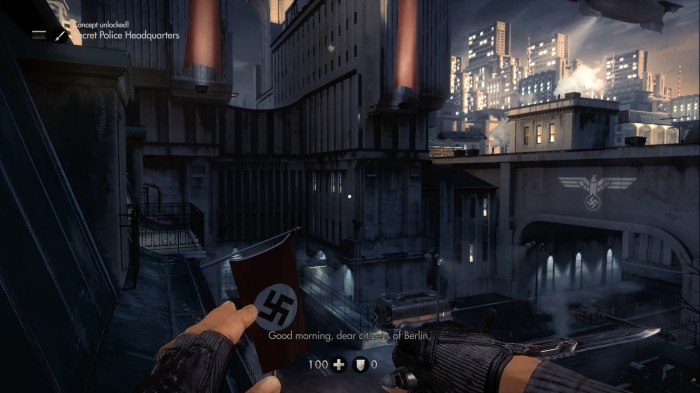 One potential downside is replayability.  The game lacks any multiplayer modes, which is an oddity for a modern shooter.  Bethesda has commented that the lack of multiplayer was to focus on a strong single player experience.  The campaign itself is not too long (9-11 hours), but can be extended with searching for Wolfenstein’s tendency to hide lots of secrets.  I purchased the game for the single player and do not seek out collectibles, and it was perfectly serviceable for my purposes. 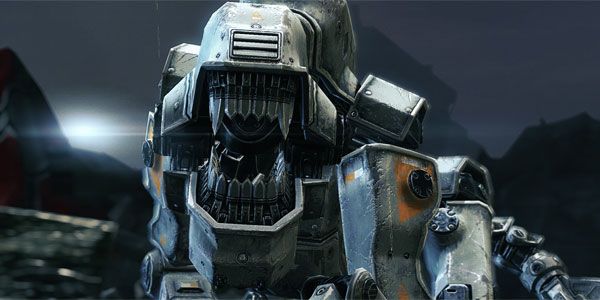 Wolfenstein: The New Order provides a fun ride in its single player experience, building on storytelling in the FPS setting while staying true to its roots.  Gunplay, mechanics, and pace are all cleanly presented in an interesting alternate historical setting.  The game meets (and in places exceeds) what modern players are expecting from a top game studio.