With the debut of the PS4 and Xbox One have come a deluge of new remakes and remasters, often with the “HD” label tagged onto the end.  Some remasters have been strong (Final Fantasy X for Vita) while others are sorely lacking (Final Fantasy 6 for PC).  Today, I want to call out some titles and series I think could really benefit from a facelift.

Now when I say remaster, I mean a real overhaul.  Visual upgrades are mandatory, but also quality of life improvements such as inventory management, or save states.  In some cases, newer iterations in a series added these improvements, and they would be great additions to previous entries (feasibility be damned).  Without further ado, lets take a look:

Throughout the release of the three installments of Bioshock, people have grown more and more divided over which entry is “best.”  However, we can all agree that a package of all three games (1, 2, and Infinite) including all DLC, would be great on the current generation of consoles.

The series never really had a problem with its visuals, and still holds up well enough today.  But having a consolidated version with enhancements, possibly even adding features from the later entries to the earlier titles (such as the dual vigor-weapon loadout into the first game) would really help to enjoy the series a second time (or third or fourth).  Not to mention that enhanced visuals would go a long way in a game noted for its incredible atmosphere.

While Irrational Games is no more, 2K could make some extra cash with this remaster.  The original Bioshock was released two years into the 360’s life in 2007.  That’s 9 years of innovation to upgrade what has become a classic.  I’d buy this day one.

So your saying there’s a chance?

If we can’t get a Bioshock reboot, can we at least have a remaster of its predecessor?  System Shock 2 came to PC in 1999, and paved the way for the Bioshock series many years later.  It was the creation of Ken Levine, and it has been begging for an upgrade for years.

System Shock 2 gave the potent combo of atmospheric horror, told through audio logs and heightened with minimal scavenged resources, rolled into a first person shooter shell.  While the game has received praise, some of its parts have became considerably dated.  The graphics are old of course, but more importantly the UI and controls could use a real modern upgrade.  Given audio and graphical enhancement, System Shock could ooze its unknown horror once again.

Luckily, there may be a chance at such a remaster.  There has been talk on a System Shock 3 which is exciting alone, but also gives hope that prior editions could get a makeover.  While their are plenty of mods to modernize the game, a complete overhaul is what I want.  Fingers crossed.

While Crash’s new owners at Activision have desecrated what was once the iconic Playstation mascot, the original games are still fun to play.  The Crash games of yore (Crash Bandicoot, Crash Bandicoot 2: Cortex Strikes Back, and Crash Bandicoot: Warped), are a far cry from the visual masterpieces of Naughty Dog today in Uncharted and Last of Us.  Imagine Crash with that level of detail.  Exciting.

Compared to some series on this list, the original trio of Crash games have highly dated graphics.  At the time, each jagged polygon helped establish the original Playstation as a threat to Nintendo, but we are better now.  A graphical overhaul that would move Crash to the current gen would highlight the vivid color and interesting environments Crash barreled through.

Other than graphics, Crash could also use some of modern games sensibilities: trophies, achievements, and even time attack leader boards.  The games were intended to be played with a fast pace, and, given their shortness, could use some of these features to enhance replayability, especially for the crowds who beat them first in 1996.

C’mon Crash — back away from your buddy Spyro and the Skylanders.  Come back here where its safe.

For this entry, we have some evidence of what it could look like.  On the Wii we got Donkey Kong Country Returns and on the WiiU we got Tropical Freeze.  Both were solid entries into a series that really missed the N64 and Gamecube generations.

The newer titles kept with the sidescrolling of the traditional games, with updated graphics and modern mechanics.  Taking Donkey Kong Country 1, 2, and 3 and applying this treatment would be a great addition to the WiiU (or 3DS…).  Back when the original DKC was released on the SNES, I was astounded at the 2.5D graphics and didn’t think it could get better (how naive).  While the WiiU is not the most powerful machine on the market, taking a 16-bit series into 2016 would do wonders.

As with Crash, DKC could really benefit from trophies and leader boards.  Also a “fast” game, DKC may also be able to implement multiplayer modes.  If this great package ever truly came together, they can leave the music as is.  No one touches Stickerbrush Symphony, OK?

As mentioned in the introduction, Final Fantasy 6 has been ported and “upgraded” across various platforms after its initial release on the Super Nintendo.  However, while the Gameboy Advance version furthered the FF6 experience, other ports regressed the iconic title.  The Playstation port was plagued by menu loading times, and the PC and iOS ports actually managed to dilute the charm of the original sprites by “upgrading” them.  Enough of that rubbish and on to the glory of modern capabilities! 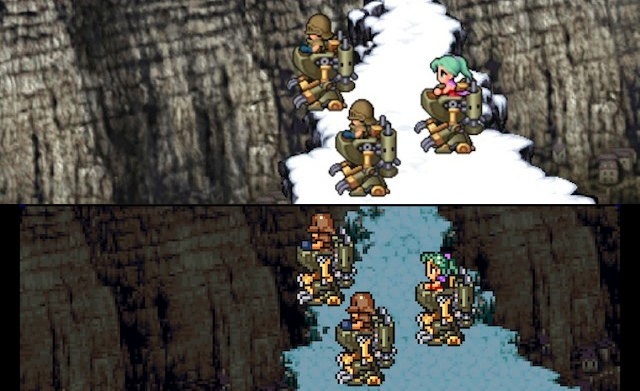 Final Fantasy 6 was great because of its characters and its storytelling.  The variety of moves and enemies also helped play a part.  With this strong core, Square Enix can take a crack at a full on remaster a la Final Fantasy 7, but for 6!  The upgrade will take sprites into full 3D.  Final Fantasy IV experienced this transition, with a somewhat mixed reception.  However, this will be a console title on the Xbox and PS4, so it should be able to chug out a bit more than a handheld.

We can of course add to the new coat of paint with upgraded UI and translation.  We are keeping the gameplay turnbased here, so quality of life improvements can be added from the TWENTY TWO years of experience we have to build on.  Glitches and the like will be ironed out from the original, and what we have left would be a great re-imagining of another iconic piece of gaming history.  Also note – no splitting into episodes like 7.

We have the technology

While this has been mostly a wishlist, these are titles that I would love to enjoy with some modern love.  Of course, the feasibility, technical and financial, was not really taken into consideration.  What series would you like to see?  What games need a refresher?

17 thoughts on “Game Series That Need A Remaster”