Continuing from my article on the rarest games for N64, today we will go over some of the most expensive, rare, and hard to find Playstation One games.

The original Playstation was released in North America on September 9, 1995, selling a whopping 102.49 million units worldwide (compared to N64’s 33 million) before finally being laid to rest on March 31, 2005.

Playstation redefined the gaming industry by switching to compact discs, eschewing the cartridge-based system of Nintendo and Sega. Sony’s new beast gave us memory cards, and some of the greatest RPGs of all time.  The original Playstation then handled the mantle to its successor Playstation 2, which had full backward compatibility.  Nowadays, you can play PSOne discs in any PS3, and have full remote play through PS3 to play on Vita.

Given the massive success of Playstation, many popular games sold a lot of units (Final Fantasy 7 has supposedly sold over 11 million units alone across all of its re-releases).  While FF7 can still hold a used $30 price tag despite its widespread release, what do the harder to find games sell for?

I wanted to separate this particular entry as it was a limited edition giveaway so it stood apart from the entries.  During E3 in 1998, Working Designs only gave out a handful of these cases, which included the game, a light gun, and a memory card.  The game itself was an RPG shooter in the vein of Time Crisis, with set piece shooting gallery styled portions.

Team Buddies has gained a cult following, and coupled with a limited release, has caused it to spike in value.  Its a co-op party game, focusing on real time strategy and other multiplayer modes.  The game is notable for its censorship issues related to its North American release.  The game’s teams were edited from their original, stereotyped nationalities including a Japanese faction using “Engrish.” 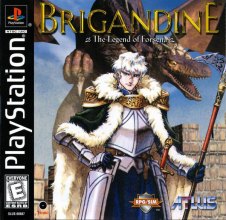 Another game focusing on warring nations, Brigandine used turn based gameplay with tactical role playing elements.  The game had a limited print run, leading to a shortage of available copies.  Combined with its niche nature and Atlus as the publisher, the game was set up for value down the line.

Also known as Tales of Eternia, and also called Tales of Destiny II (which was its PS2 rerelease), this second entry into the Tales series did not perform particularly strong in the Americas compared to its Japanese release.  The game used a innovative combat system, combining some real time battle elements with 2D graphics.  Given the subsequent success of the Tales series, this entry has increased in demand as a collectors item, as well as for its strong gameplay.

While today Suikoden II is widely adored by adamant fans, when it was originally released in the late 90s by the now disreputed Konami, it was not met with success.  A deep strategy RPG that continues the narrative from the original Suikoden, the game’s notoriety has crept upward as its merits have been noticed.  The game has become a cult favorite, spawning many sequels and spinoffs.  The game had taken a price hit given its digital rerelease, but complete used copies and sealed new copies are still some of the most sought after Playstation games.

The highest valued non-collectors edition game is a prequel to the Mega Man Legends series (also a highly sought after collectors item).  The game focuses on the anti-hero to Mega Man, Tron Bonne, and includes action, puzzle, and platforming elements.  The game had a limited initial release, but quickly grew in value as the interest in the Mega Man Legend series has grown.  The game actually included a demo of Mega Man Legends 2, and the lead character has made appearances in Marvel v Capcom, further increasing interest and value.

Other Notable Games: Many Playstation classics also have strong value, including Mega Man Legends 2, Toomba!, Tactics Ogre, and Valkyrie Profile.  Another interesting collectible is LSD: Dream Emulator, a Japanese import, which has earned a record of being extremely eccentric.  Based on the dream journal of its creator, it is an exploration game that includes disturbing and psychedelic moments alike.

Have you played any of these rare titles?  Do you still have any of these games sitting on your shelf?  What system should I cover next? Let me know in the comments!