It’s the holiday season and Blizzard is putting on a Hearthstone promotion where purchases of 40 or more Classic packs come with an additional 10 packs.  It’s an alright addition if you don’t have a lot of Classic staples, but underwhelming otherwise.

Luckily, I did need one last big batch of Classic packs and decided to take up the promotion.  Combined with Amazon’s coin deal, I was able to get the 50 packs for $35 (I had a $5 promotional credit from somewhere).  I normally play Hearthstone on an Android tablet, so it was easy enough to utilize the coins.  Basically, the coins act as the in-game currency, and you can buy the coins at a discount through Amazon (20% when I did it).  50 packs for $35 isn’t too shabby.

I’ve been playing Hearthstone since beta, although I’ve had lull periods where I got bored and didn’t play for stretches.  I’ve actually been free-to-play the entire time, which has made making multiple Ranked-tier metagame decks difficult.  I don’t have a lot of legendaries, but I do have the Naxx adventure, and part of BRM.  I needed to get some Classic staples as well as some dust to craft other quality decks (and maybe get a solid legendary or two?).  Here’s a couple of screenshots of the ultimately disappointing string of 50 packs:

First legendary of the bunch … I’ll take it!

Next legendary.  A little more useful.

This pack solidified my ability to play Paladin Murloc

This was probably my best overall pack – I didn’t have any Cabals, Bursts, or Equalitys

So I got two legendaries, neither of which are used in the current meta but were interesting nonetheless.  Got a few rares I needed but ultimately missed on a couple of staples I was hoping for.  With two packs left, I’m sure I’ll get something really good (Ragnaros! Sylvanas! Thalnos!).  What did I get in the two packs?

Yikes.  Kinda sums up the the packs on the whole.

So, those were the highlights of opening 50 packs.  To be honest, I expected more (especially in the way of epics).  I got two Far Sights, and two Bestial Wraths.  That doesn’t help much.  Guess I’ll need to get my fill over at the Hearthstone Pack Opening Simulator.

I did keep some stats on the opening.  I received 57 new cards to my collection.  I disenchanted 2 epics, 30 rares, and 167 commons for a total of 1635 dust (not including extra goldens which I also tend to disenchant).  I now have a sizeable pile of dust to try and get at least one or two solid cards with.  I’ve been debating and there seems like one obvious choice… 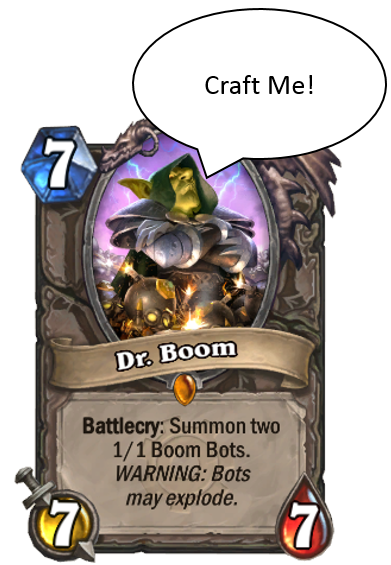 The Balance is Real

That concludes the summary of opening 50 Classic packs in Hearthstone.  I did get most of the remaining commons I needed, along with a couple of staples like Cabal.  The question now is, what do I craft?  Please give suggestions in the comments below!