Introduction: Welcome to a new series I want to start as a catalyst for getting through my backlog as well as providing some more review-based content.  The basic premise is that I will play, for a 1-2 hours (hence “One and Done”), and then review the game based on this small snapshot.  Of course, only playing such a small portion of a game is not a fair sample to fully assess the game.  Given that, the reviews are centered on scale that represents my desire or pull to continue the game.  Given that many of the games reviewed will be more obscure or games that never caught my interest before, the scores may seem harsh, but ultimately I am just trying to be fair and objective while showcasing and highlighting some lesser known games.  Be sure to share your thoughts to help flesh out my initial impressions!

Zeno Clash is the debut effort by Chilean developer ACE utilizing the Source engine.  While the game has some interesting visual elements and slightly different style of gameplay, it ultimately did not all come together for me.  I was surprised to find that the game was originally received positively by critics (generally in the 70%+ range), and even found some nominations in the award season.  Even given the game came out at the end of the last decade, I still felt it lacked the needed oomph in gameplay to fully complement its extreme originality in the visuals.

The basic premise of the game is a first-person perspective, but with an emphasis on fighting rather than shooting (although there are “guns” too).  You fight fist-to-fist with the strange denizens of Zenozoik, attempting to escape a primitive society.  From what I could surmise, this was because you killed Father-Mother, a strange bird-like progenitor of the clan, after learning some dark secret.  Your “brothers” do not take kindly to your matri/patri-cide, and decide to fight you tooth and nail (literally).  The opening sequence shows off some truly creative creature designs but quickly moved to a tutorial that did not do much to build interest in the game.

While the above portion of the story seems semi-straight forward, it is actually pretty difficult to follow.  The game cuts between different sequences quicker than I was able to really follow.  Beginning with the introduction dream sequence, I could barely understand the teacher/tutorial guide guy, who was demonstrating how to fight and use the controls.  While the on-screen prompts gave transparency as to what to do, the voice audio was nearly indistinguishable.  Further, none of the dream was explained, nor

was its place in the story made clear.  I attribute this to my lack of completing the game, but it was still off-putting when trying to figure out what the introduction cut scene even meant.  It didn’t help that the dialogue was also a seemingly jumbled mess.  This might have been a function of 1) using “primitive” speak (ie. I eat rock, You go home), 2) low quality audio, and 3) lack of clear story telling.

The gameplay, while possibly unique at the time, did not feel….satisfying?  It’s hard to describe but it was a similar feeling to the fighting in Mirror’s Edge.  Landing punches just didn’t feel like I was doing real damage and it was difficult to manage multiple enemies at once.  While easier to actually land the punches depth-wise (which was a real problem for me in Mirror’s Edge), the targeting system in the game made it frustrating to try and parry attacks from the front while dealing with additional enemies from other directions.  Basically, you lock-on to an opponent and all attacks, as well as camera movements, swivel to that enemy.  So if you do not disengage from the view to that enemy, others will start pelting you from other directions.  Further, there is no jump button which, while not necessary, felt intuitively like it should be on the spacebar to help duke it out with the enemies.

The redeeming quality of the game was its originality in the characters and enemies.  The Father-Mother, the crazy woods people, and the “brothers” all had a unique appearance, that had not aged too poorly over the last 6 years.  The environment has a amazon/deep jungle aesthetic, but is not equipped with any deep detail to really build up a compelling environment. 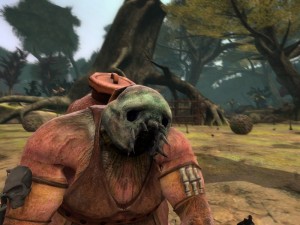 In sum, Zeno Clash shined when showing its bizarre characters, but fell flat when trying to tell its story, and in ultimately compelling me to continue through to the end.

Have you played Zeno Clash? What were your thoughts? Does it improve later in the game?

4 thoughts on “One and Done: Zeno Clash”